To the Sejm and Senate of the Republic of Poland

We call on you to stop the construction of a wall on the Polish border with Belarus.

Building a wall will not solve the migration crisis in Europe. The almost 2 billion PLN to be spent on its construction could be used by the government to subsidise the declining public health system, among other much needed investments.

Poland must respect international law and human rights. We want to live in a Europe that builds bridges of understanding, not one that separates itself from the world with a high wall.

"There are some kind of death games going on at this border, it's one big concentration camp," says a volunteer from the Grupa Granica initiative. [1] For the past two months, we have seen the drama of refugees who are trapped on Poland’s eastern border, between Polish and Belarusian border guards. At least 7 people have already died.

The Polish Government has decided that the solution to the problem will be to build a wall on the border. The bill authorising the construction of the wall was considered as a matter of urgency during the night session of the Sejm on Wednesday 13 October. The very next day, in the afternoon, it was adopted by a majority of votes at an express pace.

It is estimated that the cost of building the wall will amount to almost 2 billion PLN. According to the recently passed bill, the provisions of the construction law, water law, environmental protection law or public procurement law will not be applied to the investment. [2] This means a total lack of external control over the construction work and the way in which the gigantic amount of public funds will be used.

We don't want Europe fencing itself off with a high wall. Let the Polish government hear the voice of its citizens!

Return to petition
By clicking “Sign” you are supporting this campaign, and agreeing to WeMove Europe using your information for the purpose of this campaign. We might hand over your name, surname and country to the petition target. Unless you subscribe to receive personalised updates, we will delete your data after the campaign has ended. We will never share your data with any third parties without your permission. See our full privacy policy here.
7,088
of 10,000 signatures

Stefanie
The border wall is a great threat to migrating wild animals as well!
dsdfsd
F U C K your Petition. Put some afgan refugee in your home, or you can only scream?
Emilija
Building walls is fundamentally wrong. We need to build bridges among people instead, in particular during the times of crisis.
Caron
Building walls will not stop the refugee crisis and will not prevent people trying to cross boarders. The money that is due to be spent on building the wall could be better spent providing proper basic facilities like medical care, food, water and shelter for the refugees and for working to find a resolution to the situation with Belarus. Man's inhumanity to man continues.
Julian
walls are not Nobel Peace Prize worthy
Thanks for signing! Your signature has been added.

Will you join me?
Hi, Will you join me in making Europe a better place? I have just signed a petition 'Let’s stop the Polish government from building a wall on the border!'. This is an issue I really care about. Will you sign too? https://you.wemove.eu/campaigns/no-to-border-wall-in-poland Thank you!

Let’s stop the Polish government from building a wall on the border! 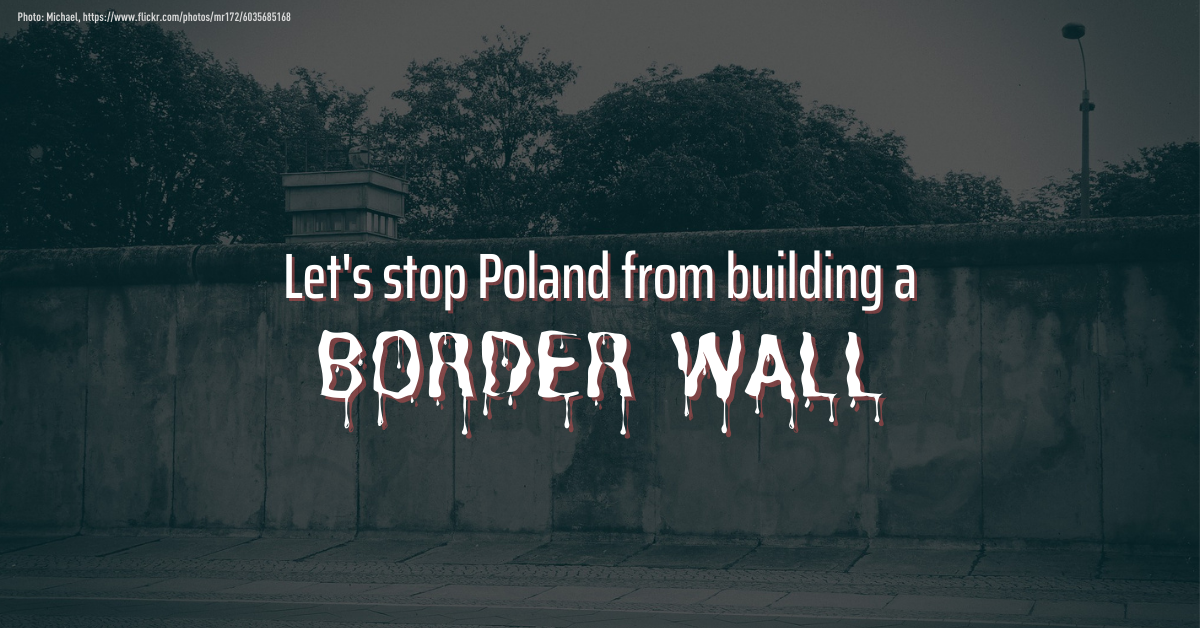