We want to preserve the Barranco de Arguineguín (Gran Canaria) from the destruction that would entail the construction of the Chira Soria Hydroelectric Plant.

Four tons of dynamite will destroy the Arguineguín ravine, a natural area home to vast types of wildlife and great biodiversity. All to accommodate the Chira Soria Hydroelectric Power Plant project.

Spanish taxpayers will be the ones footing the bill for this environmental devastation, to the tune of nearly €500 million. A whopping 12% of the island of Gran Canaria will be impacted. [1] A large part of this project involves land that is part of a UNESCO biosphere reserve or land on Natura 2000 sites, which are biodiversity-rich environments protected by the EU. This is despite the fact that Spain’s Constitutional Court ruled in 2019 that this type of land should be conserved as non-developable land of special protection. Furthermore, the project is neither co-financed with EU funds nor was it selected as a pilot project by the EU Commission, which calls into question that it complies with the objectives and directives of the EU.

As if that were not enough, this project would put the energy sovereignty of the region into the hands of multinational corporations. As a result, the people who reside in the vicinity will face a decade of construction, spills, underwater blasts, murky waters, suspended dust and heavy traffic. It’s not even clear if the plant will be run publicly or privately (or jointly), or what economic agreements have been reached for it. Several academics and experts have proposed alternatives, but they have fallen on deaf ears. The company behind the project is not interested in taking other more sustainable [and less lucrative] directions.

We know that Spain (and the Canary Islands in particular) is especially vulnerable to climate change. There is an opportunity to lead the fight against climate change with the adoption of new technologies and innovative responses that prioritise the population and the environment. The energy transition is an imperative, but it must be ecological and sustainable. The solution is not to approve projects with serious environmental consequences and that do not have local support. Sign the petition to stop the project and save this natural area.

Return to petition
By clicking “Sign” you are supporting this campaign, and agreeing to WeMove Europe using your information for the purpose of this campaign. We might hand over your name, surname and country to the petition target. Unless you subscribe to receive personalised updates, we will delete your data after the campaign has ended. We will never share your data with any third parties without your permission. See our full privacy policy here.
31,982
of 50,000 signatures

we must protect nature and fight climate change...
Esther
I have recently visited the area and it is beautiful. I do not want the local residents to suffer from this project, nor the wild life. Our earth is precious. We must look after it.
Jane
We need to protect biodiversity, and natural places. We don t have a lot of them left.
Thibault
We need to protect nature.
Avery
Without nature there is no life
Joy
Thanks for signing! Your signature has been added.

Will you join me?
Hi, Will you join me in making Europe a better place? I have just signed a petition 'SAVE THE RAVINE OF ARGUINEGUÍN FROM THE MACROPROJECT CHIRA-SORIA HYDROELECTRIC PROJECT'. This is an issue I really care about. Will you sign too? https://you.wemove.eu/campaigns/save-arguineguin Thank you! 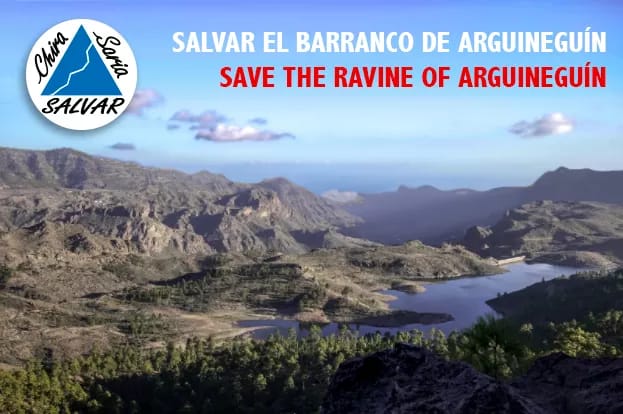