To Ana Brnabić, Prime Minister of the Republic of Serbia and Zorana Mihajlovic, Minister of Mining and Energy and Members of the European Parliament

We call upon you to prohibit extractive mining projects and metal processing in the Jadar Valley in Serbia.

In particular, we demand that you cancel the proposed Rio Tinto lithium mine in Loznica. We demand that you protect the biodiversity, fertile ground, farming villages and rich cultural areas.

Serbia’s most fertile land can be found in the beautiful Jadar Valley. Small family farmers grow raspberries and plums, engage in beekeeping and sheep and goat herding. The valley borders mountains, is surrounded by water and home to thousands of sustainable multi-generational farms.

But instead of protecting it, the Serbian government has approved a project with multinational mining corporation Rio Tinto, for the exploitation of “Jadarite”, a lithium ore in the valley. [1] The government and the company have ignored scientists and mining experts who advise vehemently against the mine and are threatening to cause irreparable damage to the water, land, air and it’s people. Local citizens, who do not want to give up their sustainable agricultural land which has been in their families for generations, are being ignored. [2]

We refuse to let the Government destroy the Jadar Valley on our behalf. We reject the poisoning of water sources.

The process of separating chemically stable lithium from jadarite ore involves the use of concentrated sulfuric acid. The process would take place 20 km from the Drina River and use 300 cubic meters of water every hour, while the chemically treated water would be returned to the Jadar River.

The outpouring of inevitably polluted water, as well as underground waters which contain arsenic, mercury and lead, would contaminate entire river basins and continue their journey across the Jadar to the Drina and Sava, polluting not only Serbia but other countries' water sources as well.

We reject the pollution of the air. Treatment with the above mentioned (and additional) aggressive acids produces toxic gases that can spread within a radius of over ten kilometers and which will corrode the skin and lungs of humans and animals.

We reject the endangerment of the population around the Jadar Valley in the interests of a multinational corporate profit. Rio Tinto has promised 700 new jobs, but forgot to mention that 19,000 people are set to be displaced or severely effected.

Rio Tinto in 2020, destroyed a 45,000 year old sacred Australian Aboriginal cave. [3] The company and its representatives have been repeatedly convicted of fraud and paid billions of dollars in damages [4] and fines for illegal destruction of land, but continue to ravage and destroy natural environment around the world. The company is accused of participating in war crimes in Papua New Guinea [5], where a ten-year civil war broke out due to the presence of their mine.

This petition is just one of the first steps in the fight against this mine, in which we stand behind the Serbian Constitution and the inhabitants of the Jadar Valley, as well as all the citizens of the Republic of Serbia who stand to suffer the catastrophic consequences of this ecologically disastrous project. To this day, we have not seen a public interest analysis for this venture, an analysis which is a legislative mandate in the actualization of such a project.

The citizens of Serbia have the right to clean air, clean water and healthy living conditions. Stop Rio Tinto’s dirty lithium mine and protect the people, our heritage, our environment and the rivers of the Jadar Valley. United we can save our environment.

Return to petition
By clicking “Sign” you are supporting this campaign, and agreeing to WeMove Europe using your information for the purpose of this campaign. We might hand over your name, surname and country to the petition target. Unless you subscribe to receive personalised updates, we will delete your data after the campaign has ended. We will never share your data with any third parties without your permission. See our full privacy policy here.
173,313
of 200,000 signatures

Rade
Richtig und wichtig! Weiter so! 💪 Do pobede
Andrej
We need to take care of environment
Aleksandar
Because Rio Tinto will change the fitur3 of the Balkans - for worse
Vladan
Samo jako, samo borba
Pavle
Lol really?
Thanks for signing! Your signature has been added.

Will you join me?
Hi, Will you join me in making Europe a better place? I have just signed a petition 'Stop Rio Tinto’s mine destroying Serbia’s nature!'. This is an issue I really care about. Will you sign too? https://you.wemove.eu/campaigns/stop-rio-tinto-mine Thank you! 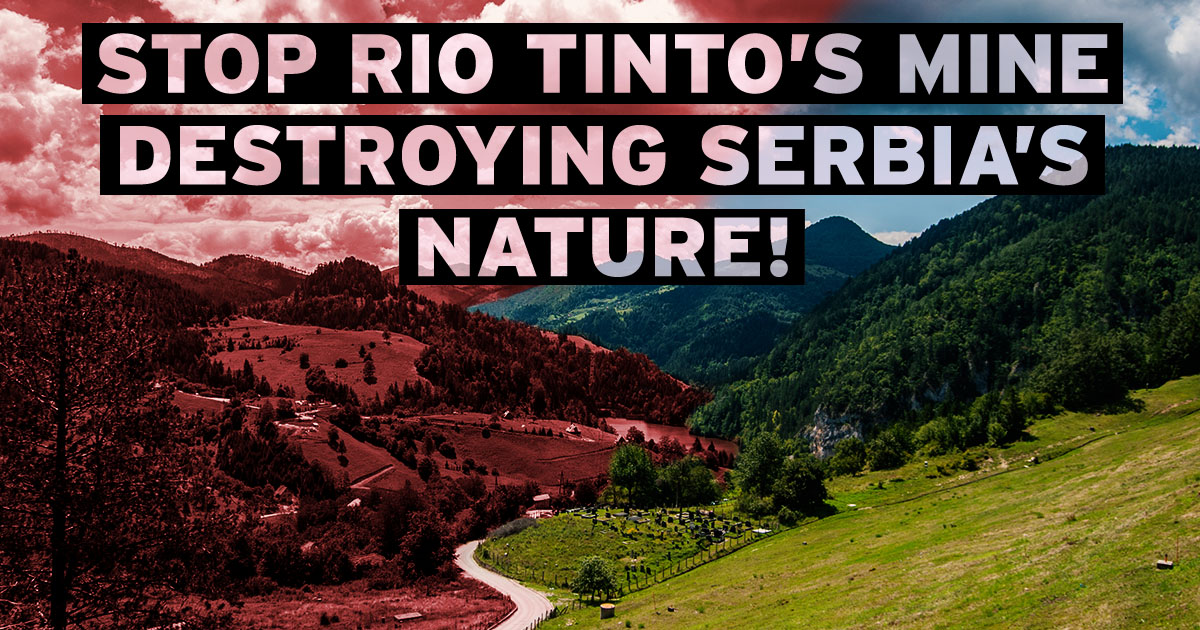