This campaign is now closed. For the first time in history we could have a way to internationally clamp down on corporate abuses. A new global treaty would introduce legally binding rules for corporations. But EU countries have been boycotting it. However, thanks to thousands of actions the European Union agreed to participate in international meeting where the treaty was discussed in November - and according to our reports, it seems in good faith! This is a great success! If you'd like to take action for a more just Europe, visit: www.you.wemove.eu.
803 of 1,000 signatures

The president of the European Commission, Jean-Claude Juncker

This petition is organised by Friends of the Earth Europe

I am very concerned about the absence of the EU and its member states from the negotiations on a UN Treaty on TNCs and other business enterprises with respect to human rights. This treaty, if adopted, could provide an historic opportunity for justice. People across the world who are suffering in the face of reckless transnational corporations will finally have the opportunity to hold them to account.

I am ashamed that the EU is undermining this important process by refusing to take part in discussions. I am joining citizens from across Europe to demand that our governments formally support the UN treaty process and do so through participating in good faith in the discussions on the nature, content and scope of the treaty taking place in Geneva in October 2016.

During these talks, we want states to consider the below points to be the basic premise of the UN treaty:

1. The treaty must introduce enforceable legislation to prevent human rights violations and stop the impunity of corporate actors for those abuses, and require them to redress adverse human rights abuses wherever they operate.

2. The treaty must allow people who have a claim against a business to access justice, not only in their own home states, but in all other states that have jurisdiction over the concerned business.

3. The treaty must contain provisions requiring states to respect, protect and facilitate human rights and access to justice of affected communities as well as of the work of human rights defenders and whistle-blowers.

Why is this important:

We live in a world where corporations have unprecedented powers. Every day, transnational corporations impact ordinary people - from exploiting workers and destroying the environment, to avoiding taxes and devastating communities through extraction. They do this with almost complete impunity because they have seized unprecedented influence over governments and decision makers.

Until now, corporations have ensured that almost all guidelines and policies urging corporations to uphold the rights of ordinary people are voluntary and not enforceable. This could be about to change.

This treaty could help communities negatively affected by big business. Unfortunately the European Union and its member states isn’t so keen and has so far been boycotting the negotiations. From trade deals such as CETA or TTIP that allow businesses to sue governments, to using foreign aid projects as business investment opportunities – the EU and its member states has a habit of securing privileged treatment for the corporations registered in their countries.

Help bring justice to victims of corporate abuse, and uphold the rights of ordinary people. Tell the president of the European Commission, Jean-Claude Juncker, that we need a binding treaty on business and human rights!

This petition is supported by:

Return to petition
Your personal information will be kept private and held securely. Details in our privacy policy. By signing, you are agreeing to receive more information from WeMove Europe and the organisation that started this petition.
803
of 1,000 signatures
Thanks for signing! Your signature has been added.

Many thanks for signing the Stop corporate abuse: we need rights for people and rules for business petition!

Do you know anyone else who cares about ending corporate abuse? Send them an email or poke them on Facebook and Twitter, asking them to sign as well!

>
Stop corporate abuse: we need rights for people and rules for business
>
Hello, From 24th of October the Human Rights Council will discuss an historic treaty that could hold transnational corporations and other business enterprises to account for corporate abuses under international human rights law. This treaty could protect people from human rights abuses by corporations and bring corporate actors to justice. Unfortunately the European Union and its Member States aren’t so keen and have so far been boycotting the negotiations. Help bring justice to victims of corporate abuse, and uphold the rights of ordinary people. Tell the European Commission that we need a binding treaty on business and human rights. I have already signed the petition! https://you.wemove.eu/campaigns/stop-corporate-abuse Many thanks!

Stop corporate abuse: we need rights for people and rules for business 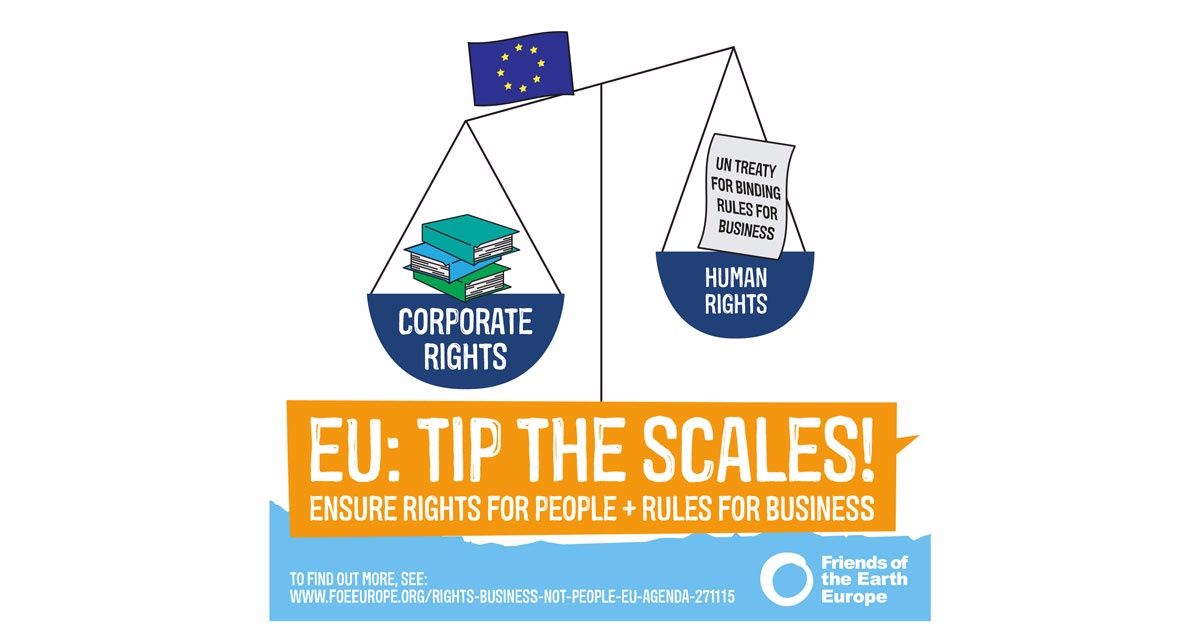 Thank you for signing the Stop corporate abuse: we need rights for people and rules for business petition!

Friends of the Earth Europe, together with many other organisations and social movements around the world, are campaigning for the binding UN treaty on businesses and human rights. Please go for more information to: http://treatymovement.com