Sorry - this campaign has finished.

This petition is run by Green MEP Sven Giegold and Franziska Brantner, member of the German Bundestag

Europe is the key topic of the French presidential elections between the first and second rounds. Macron was able to score best in the first round with a clear pro-European message – but more than 45 per cent also voted for anti-European candidates.

We should speak the truth and say that they were also against any German hegemony in Europe. All those who ranted and raved against the EU are also opposed to an alleged German „diktat“. The unease about Europe is indeed linked to German policy. Macron has along with many other experts justly criticized German surpluses, which lead to strong imbalances in the Eurozone.

Fundamentally, Europe should not worry about a German economy that exports a lot. On the contrary! However, instead of putting export earnings into sustainable investment in Germany and Europe and creating the conditions for higher salaries, they lead to higher debts by other countries towards Germany. Not only do partner countries get ever deeper in debt but frustration with Germany and the EU internal market keeps rising.

That is also why Germany should not refuse but positively welcome the constructive proposals for EU reform emanating from the French election campaign. President Hollande had also wanted to reform the EU after his election. But he got a cold shoulder from Berlin. We must not repeat this mistake. If we cannot reform Europe with a President Macron, we will be gambling with the future of Europe.

As the largest economy in Europe, Germany has an important role and should out of pure self interest be working towards stable and equal partnerships. We would like to respond to the concrete reform proposals by Emmanuel Macron and Benoit Hamon. They have made proposals to make the EU more democratic, sustainable and in stronger solidarity and to lead out of the Euro crisis. In Germany too, we want a better Europe with more solidarity. With this appeal, we would like to address the proposals of our French partners and help to launch these necessary reforms as soon as possible after the elections. We focus on three key elements:

1. An Alliance of parliaments to democratise the Eurozone.

The Euro rescue mechanisms have been created outside the existing treaties. They thus lack democratic legitimacy as well as effective parliamentary control. National parliaments are involved only through their powers over their respective national governments. But national MPs debate these issues under strong time pressures. They do not debate them jointly with their colleagues from the Eurozone, not even with MPs from the countries concerned. This makes it ever more difficult to find effective European solutions or to implement them. Overall, the influence of parliaments has been decreasing in the Euro area. Decision-making power is being concentrated in the hands of national governments, which are constantly under pressure to deliver results that designed in the first instance to please their national audiences.

We therefore propose an Alliance of Parliaments. The European Stability Mechanism (ESM) must ultimately be transformed into a European Monetary Fund under the democratic scrutiny of the European Parliament. This would also serve as a clear sign to all those that are not yet members in the Eurozone: the strengthening of the Euro is not directed against you. That is why we want to make sure national MPs are closely involved in debates and votes. Before voting on a loan or a memorandum, we want to see a joint debate with European and national MPs. This is already feasible today without any treaty change and should therefore be implemented without further delay. We hope in this way that MPs taking decisions on the euro will begin to look beyond their noses, so that a German MP will see into the eyes of a Greek colleague and a French MP into the eyes of an Irish colleague.

2. A joint budget for the Eurozone

Macron is calling for a Eurozone budget. We support this general idea and would expect such a budget to provide investment for joint innovations, and support countries in financial difficulties and also fight against economic crisis.

Access to such a budget should be conditional not only on fiscal policies but also on social standards, in order to guarantee financial stability without leading to social and fiscal dumping. Priority for investments should be given to joint projects in disadvantaged regions together with those that nurture a European identity among citizens. For example: every European should be able to study for a year in another European country - an Erasmus for everybody, regardless of age, education, or occupation! Europe’s transport infrastructure is a hotchpotch of rail networks. A complete European rail network is required to make it easier to travel across Europe in an environmentally friendly, comfortable and speedy way. We need a European StartUp fund for digital industry and other future technology sectors to promote data protection and ‘Made in Europe’ innovations. The Europe-wide switch to renewable energy and fast Internet everywhere in Europe should be financed from a joint fund within the framework of the EU budget.

For the financing of these important forward-looking projects, we support the proposal for a European minimum rate of corporation tax. Together with the essential joint measures to fight against money-laundering, tax evasion, and tax avoidance, Europe can ensure the financing of important joint projects such as these.

Europe must guarantee basic social rights – and their protection across borders – for every European; this means minimum standards for access to education, health and unemployment insurance and for a minimum wage. These should be integral to the internal market. Moreover, European standards must not trampled on by trade agreements with other countries. We want to reorient European trade policy accordingly. The trade agreements which we would to negotiate will fight against tax dumping at global level. They will contain obligatory social and environmental clauses, so that trade promotes sustainable production. If a trading partner offends against social and environmental standards, sanctions will follow. We support the setting up of a European trade authority for monitoring and enforcement of these standards

The reform proposals outlined by us are addressed to the citizens who have been marching for Europe over the past few weeks and months as part of the „Pulse of Europe“. The pro-European movement started in Germany, quickly spread to our neighbours, finally reaching a total of eleven European countries. There was the extremely impressive scene on the „bridge of two shores“ connecting Kehl in Baden-Wuerttemberg with Strasbourg in France where more than 2,000 French and German people came together to demonstrate and sing for Europe. We would like to respond to their call for a better and stronger Europe. If the French vote for Europe and against isolation, we will need this popular movement more than ever, so our governments can profit from such support to move quickly in favour of a stronger, more effective Europe. Our proposal seeks to build support inside Germany for a courageous European policy which avoids raising the hostility of other countries with policies over-emphasizing debt reduction, and which instead takes up reform ideas from France and together become the pioneers of a positive new orientation in Europe. In Europe one only makes progress together. Unilateral action leads nowhere. Our proposal is a building block for a European policy which starts with the citizens, from them and for them. We would like to react to their call for a better and stronger Europe with our proposal and get started on the way together with our French partners. Not only France needs reform, Germany and Europe also need reform. Let’s do it. Together.

Return to petition
Your personal information will be kept private and held securely. Details in our privacy policy. By signing, you are agreeing to receive more information from WeMove Europe and the persons that started this petition.
48
of 100 signatures
Thanks for signing! Your signature has been added. 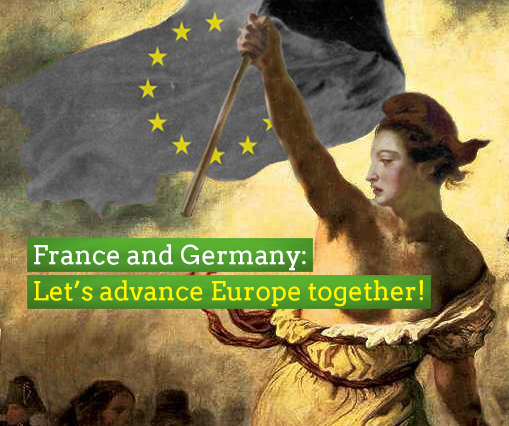