European leaders can still stop the dangerous fossil fuel pipeline. The construction of the  ‘Nord Stream 2’ pipeline has to be cancelled: it would heat the planet for decades to come. It is urgent time to end fossil fuels that are fueling climate breakdown.

Germany has a last chance to stop climate disaster by cancelling the dangerous gas pipeline, before it is completed.

Only 150 kilometers are left to be built [1]. Once finished, it will be very hard to cancel and heat our planet for decades.

It is a project that was started in 1995, long before Europe declared a climate emergency and signed the Paris Agreement. The 'Nord Stream 2' pipeline will start pumping massive amounts of climate heating gas to be burnt in Germany.

We have known for years that the pipeline is a climate disaster. Natural gas can heat up the planet faster than burning coal [2]. And in times when we should be getting rid of fossil fuels, Germany is building a new pipeline.

But we have a last chance to cancel it! Members of the European Parliament called for an immediate halt of the pipeline. [3] France also spoke out against it. And a good example comes from across the Atlantic: president Joe Biden just canceled a controversial pipeline in the US to address the climate crisis.

The European Commission and Parliament can jointly pressure the German government into dropping the project. If we are numerous, we can convince them to do just that!

Return to petition
By clicking “Sign” you are supporting this campaign, and agreeing to WeMove Europe using your personal information for the purpose of this campaign, including handing over your name, surname and country to the petition target. Unless you subscribe to receive personalised updates about this campaign and other advocacy campaigns from WeMove Europe and Deutsche Umwelthilfe e.V., we will delete your data after the campaign has ended. See our full privacy policy here and Deutsche Umwelthilfe e.V.’s privacy policy here. We will never share your data with any other third parties without your permission.
22,217
of 25,000 signatures

Georgia
bad for the enviroment
James
I hate pollution.
Richard
Stop financing Russia/Putin aggressive killing and invasion of Ukraine!
Dominik
Stop fossiles and Stop giving war mongers money!
Julia
We can not support Russia and its war and aggression toward Europe. We can not be dependant on Russia, we have to find a way to stay independent. The gas money go into pockets of Russian oligarchs and not to Russian people.
Thanks for signing! Your signature has been added.

Will you join me?
Hi, Will you join me in making Europe a better place? I have just signed a petition 'Cancel the Nord Stream 2 pipeline! '. This is an issue I really care about. Will you sign too? https://you.wemove.eu/campaigns/no-more-fossil-gas-cancel-the-nord-stream-2-pipeline Thank you! 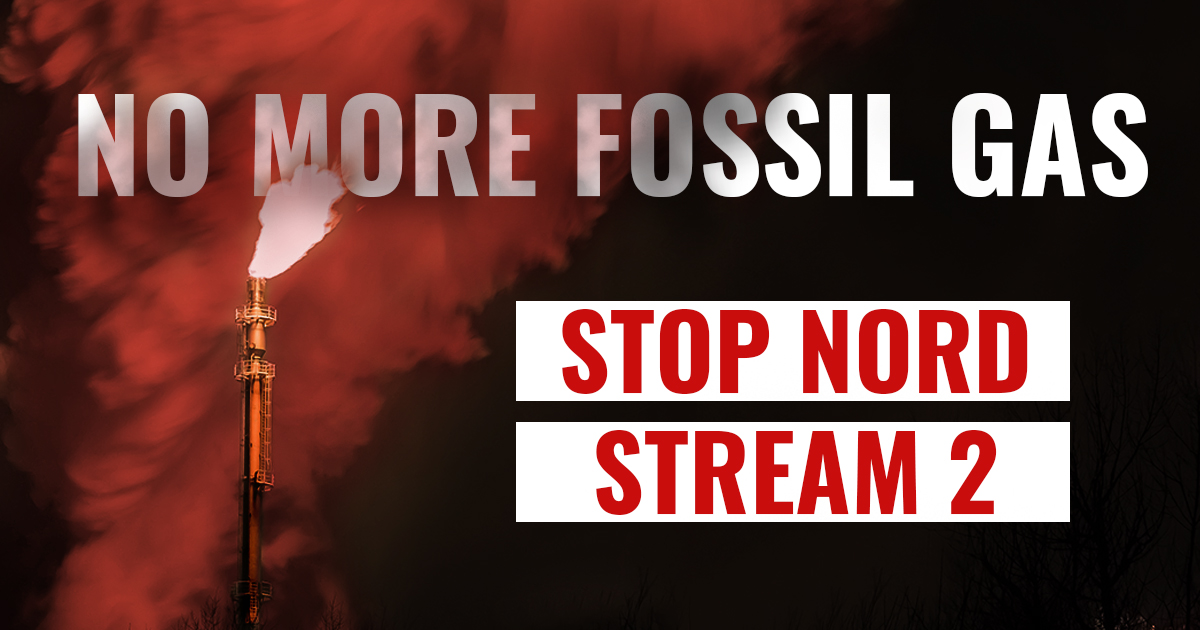 Europe has a last chance to stop climate disaster by cancelling the dangerous gas pipeline, before it is completed. Once finished, it will be very hard to cancel and heat our planet for decades. It's time to #StopNordStream2 now!