Sorry - this campaign has finished. If you'd like to get involved in other 38 Degrees campaigns, please click here: https://www.wemove.eu/you
9,385 of 25,000 signatures

to European Commissioner for Competition Margrethe Vestager, Secretary of State for Business, Innovation and Skills Sajid Javid and Chairman of the Competition and Markets Authority Lord Currie

This petition is organised by Molly Scott Cato MEP, Green member of the European Parliament's Economics and Agriculture Committees

Petition text
Just five corporations control 95 per cent of the European market in vegetable seeds. This increasing concentration of power has restricted choice in other farm crops and pushed up the price of seeds for farmers and food for shoppers.

Bayer's new bid to take over its rival US agro-chemical company, Monsanto, threatens to concentrate power even further and undermine competition. If the €62 billion deal goes ahead, mega-corporation Bayer would be able to decide virtually single-handedly what is grown in our fields and ends up on our plates. A single corporation would dominate the seed market in Europe.

Competition, freedom of choice for growers, and biodiversity are all put in jeopardy by this mega-merger. The European Commission can and must act now, with a full public inquiry into the deal. We call on European Commissioner for Competition Margrethe Vestager, Secretary of State for Business, Innovation and Skills Sajid Javid, and Chairman of the Competition and Markets Authority Lord Currie, to announce such a deal without delay.

We urge you to refuse consent to the takeover of Monsanto by Bayer AG, due to its threat to market competition and due to the political risk posed by the European seed market being dominated by just one corporation. The full rigour of the European merger control regulations must be applied.

European Commissioner for Competition Margrethe Vestager is required to take action in the interests of consumer protection, environmental protection and fair competition. Vestager must subject the planned takeover to critical scrutiny, referring to criteria set out in European competition law. If the new agro-chemical giant would be in a position to distort or restrict competition within the single European market, then the European Commissioner must say no to this mega-merger. We need those responsible for ensuring competition in the single market to send the right signals now and announce a hard-hitting inquiry.

If you value freedom for European farmers and consumers please sign the petition now!

We will hand over our petition to reinforce the message in this letter to European Commissioner for Competition Margrethe Vestager, Secretary of State for Business, Innovation and Skills Sajid Javid and Chairman of the Competition and Markets Authority Lord Currie.

Concentration of market power threatens the structural diversity, freedom of choice and future of European agriculture and food production: say no to the takeover of Monsanto by Bayer AG

There have been several articles in the media reporting that German enterprise Bayer has put in a takeover bid for the US agricultural chemical company Monsanto. An agreement might even be reached in the next few days.

As member of the Economics and Agriculture Committees in the European Parliament, and representative for the Greens/EFA in the European Parliament, I call upon you to say no to the acquisition. A concentration of market power on this scale is an existential threat to the already restricted competitive structures in the European agricultural commodity market, but also to freedom of choice in farming, and consequently to consumers. For years Europe has seen an increasing concentration of power into the hands of certain groups in the seed market. For example, 95 % of the European vegetable seed sector is controlled by five large-scale enterprises. If Bayer AG were to acquire Monsanto, that would fall to just four. A study by our parliamentary group on the concentration of market power on the European seed market[i] refutes the widespread but misleading claim that the production and provision of seed in the EU is mainly in the hands of small and medium-sized enterprises. The direct consequences are reductions in seed variety, biodiversity and research work, an increasing dependency on a small number of suppliers, and rising prices (approximately 30 % over the course of the last 10 years).

It is obvious that the takeover of the seed market leader Monsanto by the Leverkusen-based company will lead to a further concentration of market power, a squeeze on other producers and therefore greatly reduced competition, not only in the EU but worldwide. This goes hand in hand with an increase in Europe's political responsibility for the steady decline in genetic diversity in agricultural crops and in nature. This is diametrically opposed to the political commitments which the European Union has entered into internationally and within Europe, but also at Member State level, in a bid to halt and counteract the loss of biodiversity.

As you are aware, the agricultural chemical company Monsanto is also a leading producer of pesticides and genetically modified plants. The current debate about the re-approval of the herbicide glyphosate shows that European consumers are taking an increasingly sceptical view of industrial methods in agriculture, and are calling for policy to be brought into line with their interests, rather than economic interests, in the face of potential damage to the environment and to the health of humans and animals.

The acquisition of Monsanto would inevitably be regarded by the European people as a reorientation of European agricultural policy towards agroindustry and its interests. We therefore urge you to refuse consent to the takeover of Monsanto by Bayer AG, both on competition law and political grounds. The full rigour of the European merger control regulations must be applied.

Return to petition
Your personal information will be kept private and held securely. Details in our privacy policy. By signing, you are agreeing to receive more information from WeMove Europe and the organisation that started this petition.
9,385
of 25,000 signatures
Thanks for signing! Your signature has been added.

Many thanks for your support of our petition against the Bayer-Monsaonto deal!

Do you know anyone else who cares about transparency and democracy? Send them an email asking them to sign the petition!

>
Block the Bayer-Monsanto deal!
>
Hello,   a dangerous plan to create a new mega enterprise is looming ahead: Bayer intends to swallow US-corporation Monsanto, which is operating in the agricultural chemistry sector. This would have dire consequences: It would make Bayer the sole decisionmaker over what will be growing on our fields and hence what will be served on our plates. The company would be given control over the entire seed market. Competition, freedom of choice of producers and biodiversity are at stake. The EU Commission must prevent this mega fusion! Please sign our appeal to the EU Competition Commissioner, Margrethe Vestager, German Federal Minister for the Economy, Sigmar Gabriel, and the President of the Federal Cartel Office, Andreas Mundt! https://you.wemove.eu/campaigns/block-bayer-monsanto-deal Many thanks! With kind regards 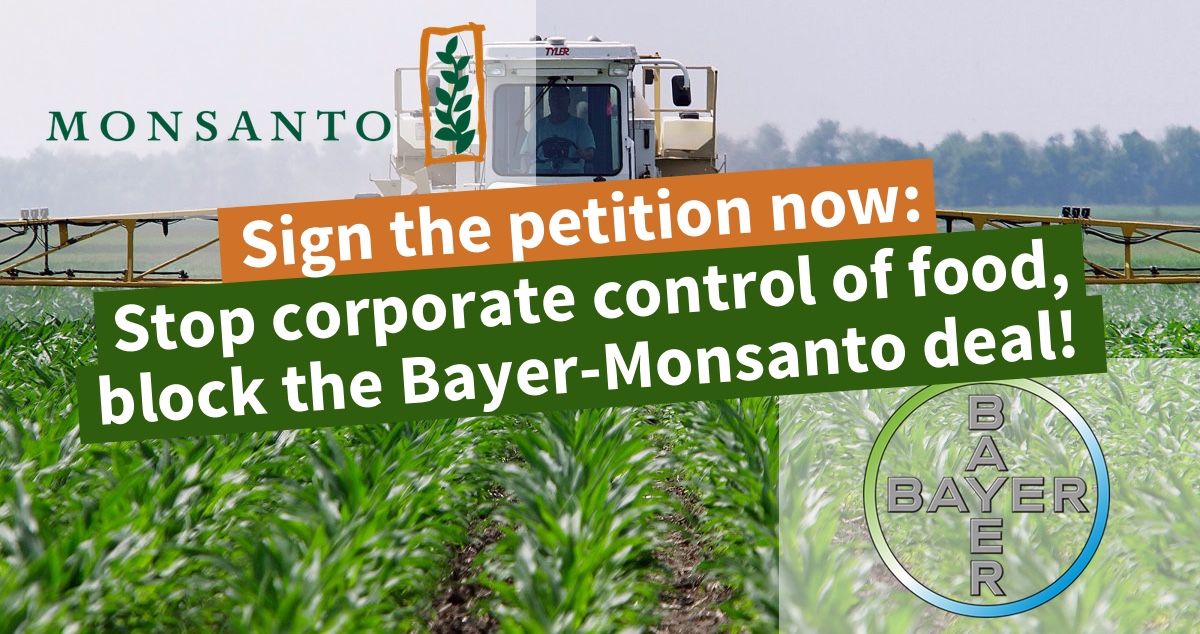 Bayer's new bid to take over its rival US agro-chemical company, Monsanto, threatens to concentrate power even further and undermine competition. The EU-Commission must stop this deal. Please sign our petition!

Thank you for signing the Block the Bayer-Monsanto deal! petition!