This petition is run by Alexandra Geese, Member of the European Parliament, Greens/EFA

The Coronavirus crisis has hit all Europeans hard. But its economic impact is hitting women harder than men. While at the beginning of the crisis women’s work in hospitals, childcare and supermarkets was appreciated with applause on the balconies and public declarations, they are still dramatically underpaid.  Women are now losing their jobs at a much faster rate than men. Many of them work in “client-facing sectors” - tourism, events, hotels, restaurants, retail trade, different forms of therapy and many others which have been particularly affected by the crisis.
Women carry out the bulk of the additional unpaid work arising from closed schools and childcare facilities, sick family members and closed canteens. In Germany, it was calculated (1) that parents spend three hours a day homeschooling their children. In 82% of the cases “parents” meant mothers. Due to this extra amount of extra work in the home, women hardly have time to participate in the public debate anymore. An article published in the journal “Nature” (2) and some early academic studies (3) during the COVID lockdown showed that during the Corona crisis female academics submitted only half of the research papers  to scientific journals compared to the previous period in 2019. Male colleagues submitted more compared to the same period in 2019. Women have less time than ever to invest in their careers  - while rising unemployment leaves companies ample choice in hiring among men. This will make women’s advancement to the higher echelons of decision-making even more difficult.
The Coronavirus crisis is turning into an enormous crisis for women’s income, life-long earnings, pensions, overall participation and power in society. Now is the time to turn this moment into an opportunity for the advancement of gender equality.
The European Commission and the European Council are developing a 500 billion  euro Recovery and Resilience Instrument. We support the Franco-German initiative for the planned EU reconstruction fund and wish it broad approval. This investment plan to relaunch and modernize the economy, with a priority on the digital and green transition, will shape Europe’s future by combating climate change and ushering in the green and digital transformation. This is an an absolute priority which we share, but there is on caveat: the digital and the energy sector are known to be male-dominated. Without additional measures, this economic stimulus instrument will not offer jobs for the women who are losing them - but for men. This could could turn into a redistribution programme of jobs and income being transferred from women to men. And thereby an instrument which will increase the impoverishment of women, funded by European taxpayers - half of whom are women. This is an example of unintended consequences which arise when the gender equality perspective is not involved applied at the onset of budgetary and recovery stimulus plans.

Support us in our fight for a gender-equal Europe!

Links:
(1) Studie zum Unterricht zuhause "Homeschooling" belastet die Familien
(2) The pandemic and the female academic
(3) Who is doing new research in the time of Covid-19?

Return to petition
By clicking “Sign” you are supporting this campaign, and agreeing to WeMove Europe using your information for the purpose of this campaign. We might hand over your name, surname and country to the petition target. Unless you subscribe to receive personalised updates, we will delete your data after the campaign has ended. We will never share your data with any third parties without your permission. See our full privacy policy here.
4,367
of 5,000 signatures

Patrícia
When we invest in women we are investing in children and in the future.
Alison
Why not more than half of it?
Serena
to be treated equally - based on my work, not my gender
Anne
That's a no brainer, isn't it?
Ania
Policies contribute to the gendering of societies by upholding and reinforcing inequality. We must and can do better.
Thanks for signing! Your signature has been added.

Will you join me?
Hi, Will you join me in making Europe a better place? I have just signed a petition '#halfofit - We demand half of the Corona funds for women.'. This is an issue I really care about. Will you sign it too? https://you.wemove.eu/campaigns/halfofit-we-demand-half-of-the-corona-funds-for-women Thank you! 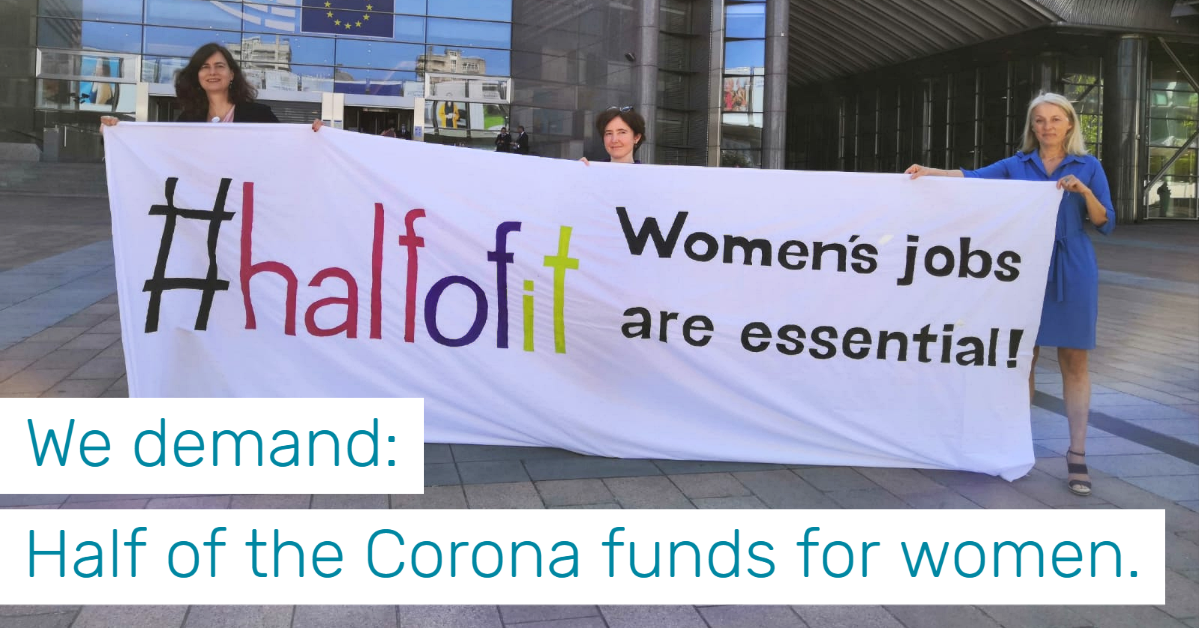